I’m sure many of you have wondered what happen to the newsletter.  If the is truth to be known,  I lost my discipline to get one out every month even though I know newsletters are important for communicating to members and for building community among the members.  I’m planning to start the practice of distributing a newsletter once a month during the time of the year where the flying activity is the greatest.  That time range would be April thru October.  During the winter months when flying activity is down, I will put out just a couple of newsletters.

Resignations
Niki Gaskins is leaving the club to move to Appleton, Wisconsin.  Her husband, Rob, has taken a job there as a quality control inspector.  The Gaskins are in transition mode now with Rob commuting to Appleton to work during the week.  They do not have a house yet, but are working on selling their current one before they buy a house in Appleton.  Nike thinks it will be early July before that happens.

Niki moved to the Quad Cities in 2014 but was a club member for only the last three years.  She has been a great asset to the club by providing flight instruction and by being one who takes initiative to get things done.  For those that might not know, she was the one that got our club house cleaned up.  Niki’s CFI work was more doing flight reviews than teaching new students.  However she did have a few people that she prepared for their flight exams, and they were: Bob Kem, Dave Wennlund and Shellie Darr with Shellie being work in process yet.  She is still working with Shellie and is determined that she is going to see Shellie get her certificate before leaving the area.

Thank you, Niki, for being a valuable member of our club.  We all wish you well in your new home.

In addition to Niki’s resignation, Josh Brooks has recently submitted his.  Josh has taken on a new position at his work place that is putting more demand on his time, and he also became a father earlier this year.  The work demands and his responsibilities as a family man have made it problematic that he would be able to attend meetings regularly.  He plans to continue to be plane captain for the 152, so when the oil needs changing or something in the 152 hanger needs attention, he is the one to contact (810-348-0911).  He also will do as much flight instruction as he can manage.  Thank you Josh for serving on the board.

When Niki resigned, we decided to reduce the number on the board to seven from eight because the larger number of board members was making it difficult to assemble a quorum.  We had to cancel several meeting last winter because we were short of a quorum.  However, the position left open by Josh’s resignation needs to be filled.  The board is soliciting the board membership for someone to fill the vacant board position.  There are no defined responsibilities such as there is with president or treasurer.  The task is to attend meeting to help make decisions on matters before the board.  Those of us that are not officers often take up tasks in support of the boards functions, and some take the initiative to do things much as Niki did with cleaning up the club house.  Please consider joining the board.

From a personal point of view, I find being on the board is beneficial in that I am able to stay abreast with what is happening in the club.  The club has started the process of equipping the airplanes with ADS-B.  Being one who is not into a lot of the electronic equipment, I find it beneficial to be involved in the installation of ADS-B. The airplanes that we fly don’t just miraculously show up in the hangars.  There is work involved in making that happen, so please give serious consideration to being one of those that ensures that we have airplanes to fly. 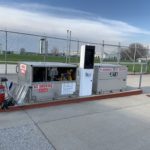 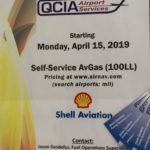 For those that may not know, the club now has access to self-service gas.  The pumps are located just to the East of the building behind Jim’s shop.  You can see them sitting out in the middle of the tarmac if you look on Google Earth.  You deal with the receipts the same as you would with self-service from any other pump.  Submit your receipts to Brad for credit toward the gas you bought.  It is best for the treasurer if you submit your gas receipts as you get them.  He has to enter the gas credits into Quick Books, and it is less of a daunting job to do it over the progression of the month rather tallying the receipts all at once at billing time.  Brad Ward is the treasurer, and his email is “braddward@gmail.com” If you don’t have the capability to scan your receipts to be sent by email, you have the following options to get your receipts or a copy to Brad.

With Niki leaving and with Josh having limited time to instruct, the club is needing to find more flight instructors.  There are people wanting to join the club, but we aren’t able to admit them because there is not a sufficient number of flight instructors to teach them.  If any of you would happen to know of a CFI that is looking to teach, please contact Jim Goetsch (309-314-0002).