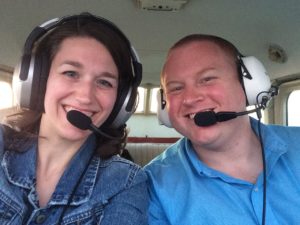 Dave received his instrument rating November 2017.  He was instructed by Josh Brooks.  I apologize for taking so long to get this piece of news out, but several things conspired to prevent that from happening.  Dave joined the club last May with a private pilot’s certificate.  He received his training at Carver where he was instructed by Niki Gaskins in 2016.  He got his private license in November 2016

Dave has ambitions to fly commercially.  His interest in doing that started at the 2016 Quad Cities Air Show where he visited a booth being maintained by University of Central Missouri which has a professional pilot program.  After his visit with the UofCM people, he was inspired to look into the possibility of flying commercially since he had been looking for a career change.  After some family discussions, he and his wife decided to go for it.  While he was working on his private license, Dave went to a job fair hosted by Elliott Aviation to see what he could find in the way of employment in the aviation industry to supplement his flight training.  Not being qualified to do tasks such as a mechanic, he did get part time work at Elliott doing fuel billing of Elliott’s clientele.   I’m sure everyone wishes Dave success in his new career pursuit.

I want to commend all members for responding so well to the insurance survey this year.  There were very few phone calls made to prod stragglers to turn in their information.